Before there was a WESTAF, there was the Federation of Rocky Mountain States, itself an outgrowth of the “Sagebrush Rebellion” of the 1970s.  Initially, the Federation comprised eight inland western states, which joined forces in 1965 to tackle their shared economic and cultural challenges. At the time of its formation, nothing else quite like this multistate, private, voluntary corporation — composed of leaders from government, industry, research and education —existed. [1]

Its operating structure included the Federation of Rocky Mountain States Council on the Arts and Humanities, chartered in 1969 to “look at the problem of cultural deprivation and determine what could be done about it.”[2]Touring formed the bulk of the Council’s programming initially, a response to the region’s geographic realities. It offered a way to help maintain the unique communities scattered across its territory, and the National Endowment for the Arts stepped up with financial support. 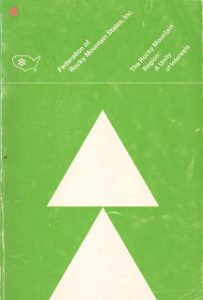 In 1972, the Council was incorporated in Colorado as the Rocky Mountain Arts and Humanities Foundation based in Denver. By 1974, it had redefined itself as the Western States Arts Foundation (WSAF) in response to NEA rules requiring organizations receiving federal funds to register as a 501 (c) (3).[3] Along with its new name, it also added two new states and their arts council directors and chairs.

Its leadership evolved over the next few years, as Richard D. Collins became WSAF’s president in 1975, succeeded in 1976 by Richard Harcourt. “A massive disruption of the organization in 1979” led to the appointment of Bill Jamison as executive director in 1980, and WSAF’s relocation from Denver to Santa Fe, NM, where it remained until 1996.[4]

Terry Melton replaced Jamison in 1984, and in 1987 WSAF transformed once again, becoming the Western States Arts Federation, managing a range of programs from dance and literature to a new Folk Arts Initiative. In 15 years, WESTAF had grown in scope, and launched a number of new projects, including its Western States Biennial Exhibition and the Western States Book Awards. Not bad for a bunch of rebels![5]