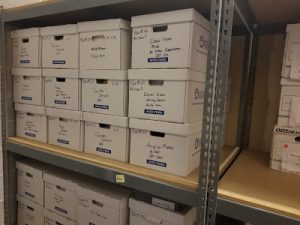 Work began on WESTAF’s Archive in 2015, with dozens of sagging file boxes taking up space in the office and on bookshelves. What they contained illuminated not only the history of WESTAF, but also of the evolution of public support for the arts in the United States.

From its beginnings in 1972 as an offshoot of the “Sagebrush Rebellion,” whose policymakers recognized the cultural as well as the economic value of the region’s arts, WESTAF has offered technical and operating support to its members, growing from eight to 13 states.

Today, WESTAF looks like a leader of the avant-garde, moving the idea of arts support into the realm of technology. Even in its first decade, however, its staff sought to harness what were then state-of-the-art technologies to its vast programming efforts, ranging from a widely read employment listing, which moved from newsletter to online database, to leasing computers to help artists sell their work. Over the past 45+ years, WESTAF has helped send dancers, musicians, authors, and artists into towns large and small across its far-flung region, ensuring access for millions to the variety of activities that we call the arts.

About the WESTAF Archive

This Archive documents the evolution of the Western States Arts Federation – aka WESTAF – from its inception in 1973 through 2014. It preserves a range of materials that illustrate its growth and development as a Regional Arts Organization [RAO] or pertain, in whole or in part, to activities within its geographical boundaries of its 13 Western member-states.

RAOs perform an important role in bringing the arts to their members, functioning as conduits for public monies from government sources, primarily the National Endowment for the Arts and state arts agencies. However, as public support for the arts came under attack in the culture wars of the 1980s and 1990s, those sources of funding became less stable and less generous. This archive maps WESTAF’s journey toward lessening its dependence on government funding through innovation and investment in technology.

The WESTAF Archive contains a variety of documents tracing its formation from the Rocky Mountain States’ Arts & Humanities Council in 1970 to its legal separation from the Federation of Rocky Mountain States in 1973 to become the Western States Arts Foundation, until finally evolving into the Western States Arts Federation in 1976. The archive encompasses Series 1 through Series 8.  Box numbers generally correspond to the Series, with File Folders numbered consecutively by date.

Papers in Series 1 include original documents of incorporation and other legal matters, as well as newsletters and ephemera of WESTAF’s formation; Board of Trustees policies; legal documents; meeting agendas & minutes; directories; long-range plans; materials related to its standing committees; and educational/publicity ephemera. This Series also contains papers relating to WESTAF’s reorganization following the NEA’s reduction of its annual allocation in 1994 to $1 million from about $2 million, leading to its relocation in 1996 to Denver from Santa Fe and its pivot toward earned income through technological innovation.

Series 3­—the largest part of the collection—comprises WESTAF’s myriad projects and programs, organized alphabetically and divided into two categories, historical and earned income. As noted, the NEA initially provided most of the funding for WESTAF’s programs, supplemented in the early years by generous contributions from private foundations. When NEA funding collapsed beginning in the 1980s, and foundation support dried up during a series of recessions throughout the 1990s, WESTAF developed a ground-breaking earned income funding model [ca 1999] that relied on licensing and servicing software designed specifically for the culture industries. It partnered with software developers and took advantage of the rapidly evolving Internet, thus serving its member states with a more predictable funding stream. Documents in Series 3 include memos, grant proposals, funding reports describing the vision for each project; budgets and financial papers and projections; business & marketing plans; correspondence; directories of advisory committee members, meeting minutes, agendas and notes; and grant applications to private foundations.

The series divides into two overlapping categories­­—Historical and Earned Income. The former includes extensive materials on historical undertakings, such as Folk Arts and the Grand Canyon Project; WESTAF’s Literature initiatives, from TumbleWords to the Western States Book Awards; records of its annual Symposia, launched in 1997 and one of its earliest endeavors in creating conversations among a range of stakeholders regarding the state and status of arts in all their forms; Visual Arts fellowships and exhibitions; and TourWest, which still allocates about $500,000 a year in small amounts to support performing arts tours, which led to the innovative IMTour™ [Independent Musicians on Tour], launched in 2016.

Beginning in 1997, WESTAF partnered with an array of software developers to create an Internet presence. By 1998, it was exploring a possible virtual art gallery, an online art auction, and studying an online grant service, all with an eye toward earning income to bolster its diminishing public dollars. WESTAF’s earned income projects evolved from ArtJob™, one of WESTAF’s oldest programs, and ArtistsRegister™, the “mothership” of its extensive selection of software from CaFE™, CGO™, Public Art Archive/PAA™, to ZAPP™.  CVI™ [Creative Vitality Suite/Index™] developed in partnership with EMSI to provide arts organizations from small towns to entire states and regions with reliable economic data demonstrating the value of the arts in every community.

The records include contracts; financial and legal documents; grant proposals; traffic reports and bug fixes; and research reports for its earliest efforts at tech applications, from ArtsComputer, to Circuit Riders and 900-737-ARTS [Artists Helping Artists], two telephone-based projects. The income generated by these licensed software programs helped support WESTAF’s involvement in the arts advocacy efforts of its member states, as well as audience development research and projects on their behalf.

Series 6 contains records of WESTAF’s own publications, either commissioned or directly relating to the organization, plus a substantial collection of National Endowment for the Arts’ annual reports; research reports; historical documents. WESTAF publications include position papers, exhibition catalogues from 1976-1995, copies of every Western States Book Award winner from 1984-2001,  technical production handbooks, and transciptions of every Symposium since 1997.

The papers in Series 7 address WESTAF’s production of a range of special research reports relating to cultural production and development, the arts economy, and public funding issues on behalf of its member states and other arts organizations nationwide. Documents include correspondence; research reports; financial documents; surveys and analysis; papers relating to cultural policies, percent-for-art undertakings, cultural trusts, and cultural tourism.

View the WESTAF Archives at the links below:

On the Road: WESTAF on Tour

Tumblewords: Writers Rolling Around the West

Art Job: One of a Kind